Raine & Horne Darwin recently held their Xmas Party at the Crocosaurus Cove in the middle of Darwin’s CBD. There was a safari theme attached to the evening and everyone went out of their way to impress with their attire.

For some reason Ilyse Elphick thought that her comedy genes were equivalent to Billy Connelly’s and offered up that I would be immersed in the ‘Cage of Death’ to entertain the crowd.

Naturally I handled this with my usual aplomb and showed that Croc who was boss! 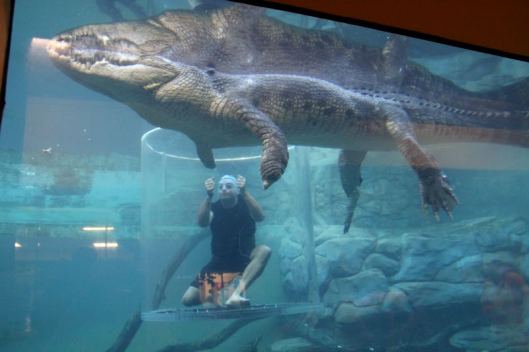 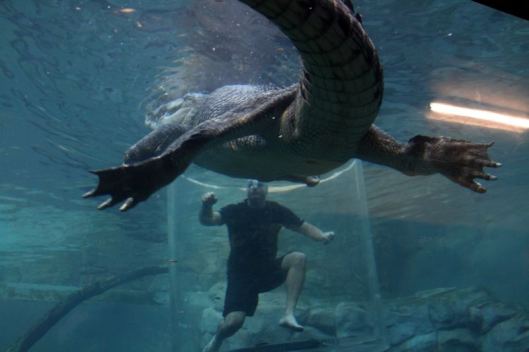 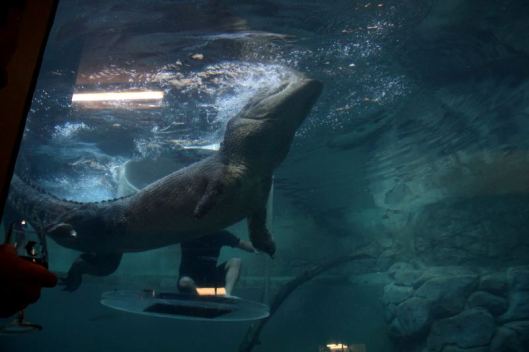 The evening was tinged with a note of sadness as we are about to lose two of our long time team members, Billie Mackie and Jess Rettke. We wish the girls great success in the future and know that our paths will cross here and afar.

Croc Cove was a great venue and there was a load to do and heaps of fun had by all on the night. Have a great Xmas team and come back ready to go hard in 2013. 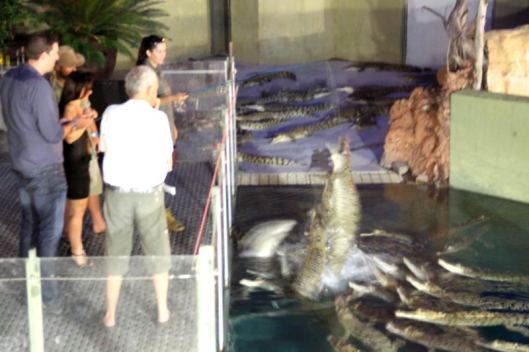 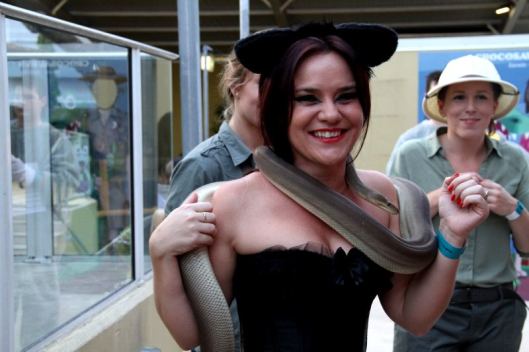 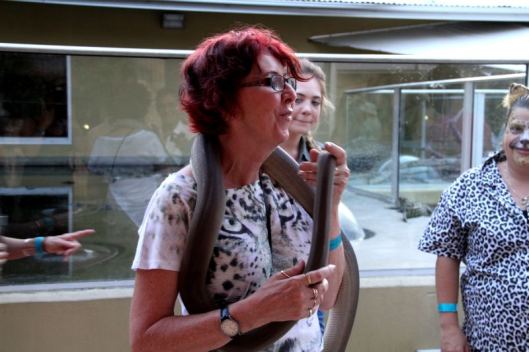 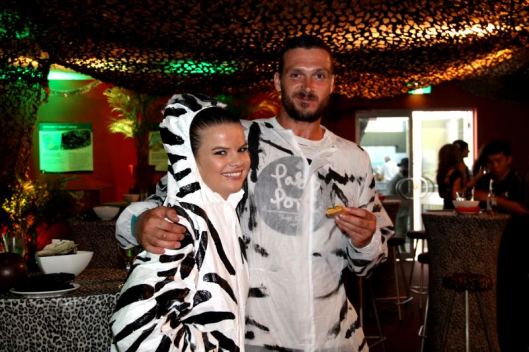 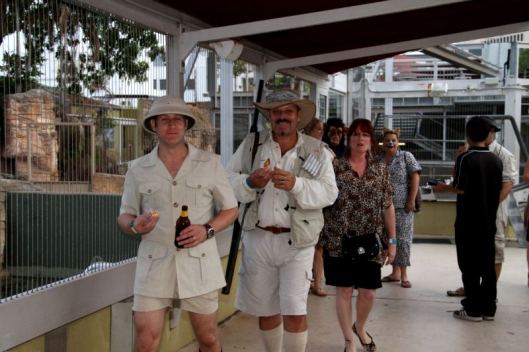 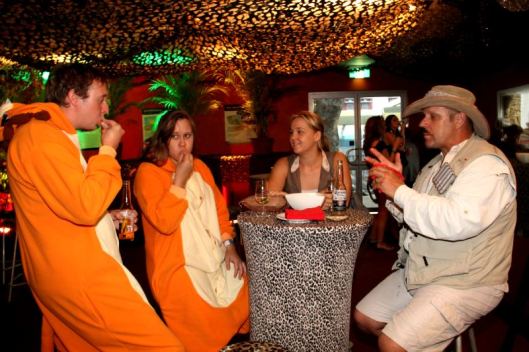 I am commonly known as the Christmas Grinch around our office and to be honest I do not have any idea where I developed this attitude however it is one that I have carried for many years. It could have something to do with the insanity of my ex in-laws who were the Italian version of the ‘Never-ending Story’ combined with ‘The Last Supper’ when it came to all things Xmas……however I digress.

What I want to tell you about today is an AWESOME Community service that we have just completed over the last 2 weeks and that is something that we call ‘Taking Santa to the Streets’.

Every week day at about 4pm we loaded up the ute with tinsel, whacked on the Xmas Carols and dressed one of my team up in the Santa suit whereby he hung off the back whilst we trundled down some of the local suburban streets. The whole Sales Team surrounded the procession with Mick Smith (hearing aid turned down) ringing the bell and out came the kids!!!!! Whereby we gave them lollies, they had a pic with Santa and later next week they will get their photo on a calendar for their fridge. 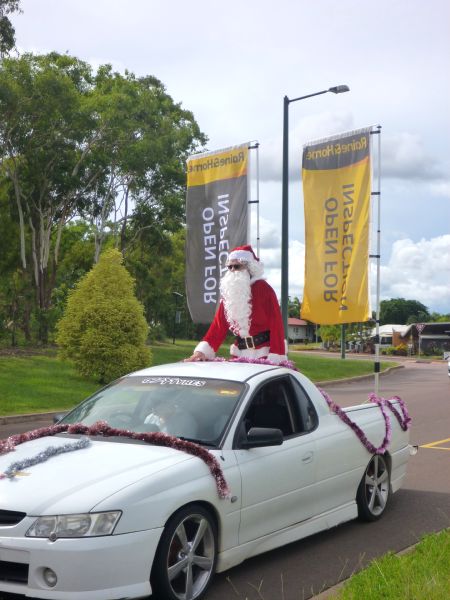 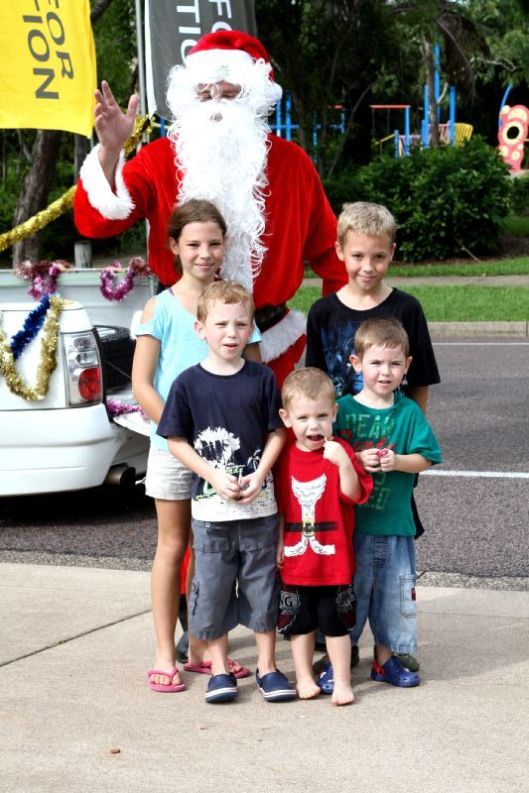 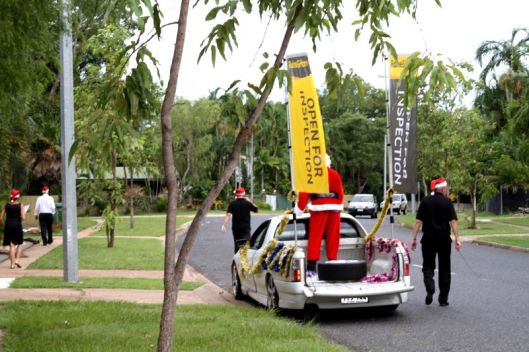 Now I reckon it was pretty amazing…..for Santa in the suit it was amazingly hot as we prepare for a cyclone in 34 degree heats and 90% humidity however check out the email we got below…..someone else thought it was pretty cool too….and that is enough to make us return to the streets next year.

Could you please pass on my thanks to whoever was involved in organising Santa in Palmerston suburbs today.  He came up our court, bells ringing and ho ho ho-ing, surrounded by his merry little elves (agents).  Lollies and photos, and generally spreading Christmas Cheer.

A marketing ploy or not, you have made four little children in Birripa Crt very happy.

Thank you, and a Merry Christmas to you all! Especially Santa….

Hopefully next week I will have some video for you to have a look at on the Santa Run…..my elves are on holiday from the cutting table.

Merry Xmas from the Grinch???? and his team!

The article proclaims that 75 per cent of Northern Territorians said sex had great ‘stress management’ benefits and that Christmas could be a very stressful time of the year.

Well that is AWESOME news. I then started to think about what creates me the most stress and how we could apply this cure.

I reckon since 99 per cent of people’s stress is created at work this could be the first focus of our attentions. If you work in a mixed gender industry this could come as great news! Previously I had been of the thinking that workplace interactions of this type were not the best idea however if the NT News is publishing it well it must be right?

Maybe we should take a moment to spare a thought for those who work largely in a same-sex industry like Mining or the Armed Forces. We don’t want these guys all stressed up so perhaps we need to loosen up the policies on same-sex unions in the workplace as well. Julia will get right onto that I imagine.

Thinking of alternate applications….Exam times can be very stressful for our kids in Year 11 and 12….Just before you get married the groom tends to get very stressed and he isn’t allowed to see the bride the night before….and finally I have heard that Selling your Home is a very stressful time….Real Estate Agents rejoice!