The team at Raine & Horne Darwin were at it again for the month of Movember….Raising funds to aid Men’s health.

This year had been a busy year in the Darwin Real estate market so they scaled back a little on the events however still set a lusty target of raising $5 000.

The major event for the month was ‘The Amazing Race’ which promoted a car rally around the streets of Darwin and raised $3 000. 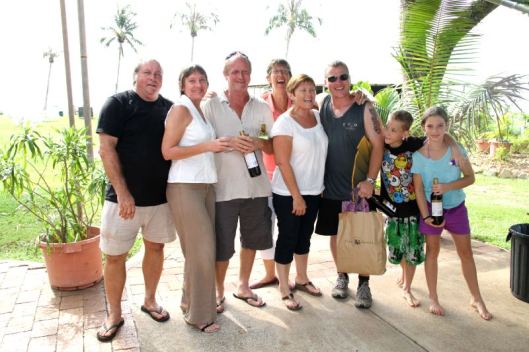 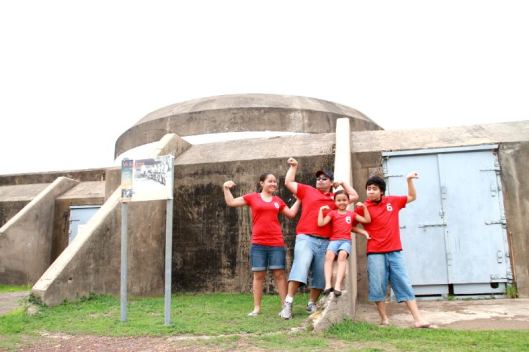 The shave off was held at the end of the month much to the relief of many of the team who waved a very happy goodbye to their bum fluff.

There were some average Mo’s on show with Cameron McDonnell collecting a bottle of Jack’s for his meagre effort!

Whilst Dale Reid rocked out the chops to take away Mr Movember for Darwin with this little ripper.

Raine & Horne Darwin is hosting the Amazing Race in aid of Movember again! Look at this sexy Mo! 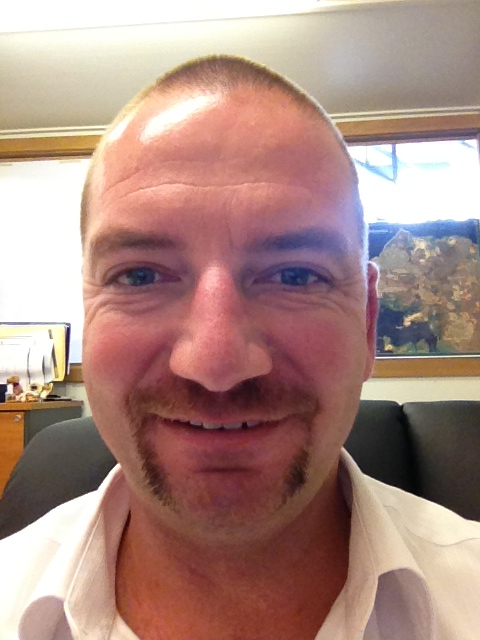 Last year we raised $10 000 and were the largest fund raiser in the Territory. Help us raise the big bucks again by participating (See Invite Below) or donating at http://au.movember.com/team/540365 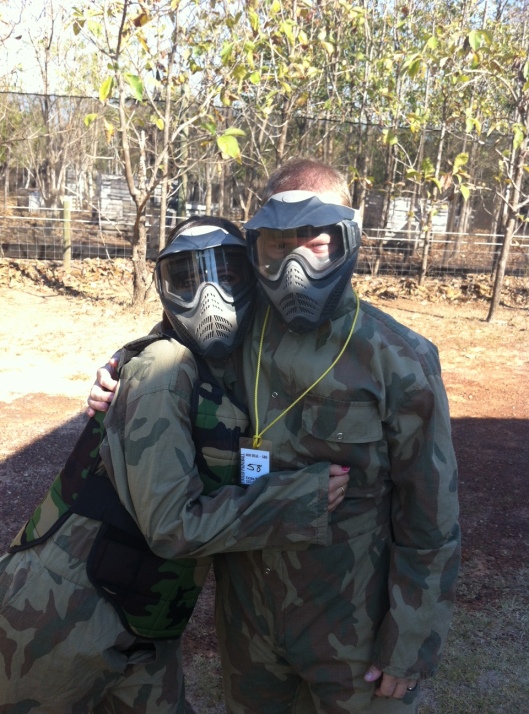 Richard (proprietor) of NT Tap & Drain was the succesful bidder at the 2011 Movember Auction of the ‘United Paintball’ prize which meant that his team would have the opportunity to blast away at the team from Raine & Horne Darwin.

Percy from ‘United Paintball’ was the perfect host for the day and set out the combat rules for the games to begin. It was a nervous couple of teams that received the pre battle briefing since alleged ‘Severed Head Murderer’ Jonathon Stenberg was reportedly hunkered down close by. 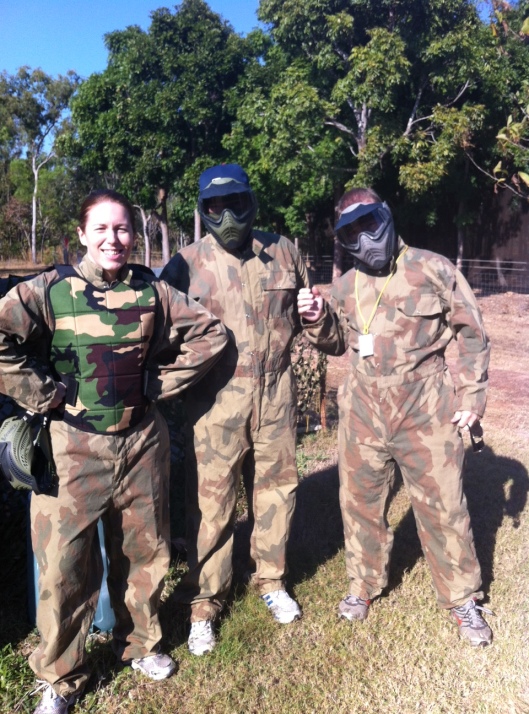 There were a few jokes flicked around like ‘apparently you can hear the difference between a paintball and a magnum so duck if it sounds funny!’ However such is the nature of those with blood lust that this was soon at the back of everyone’s mind as the pellets began to fly……They caught him the next day and he only had 3 or 4 guns with him so all good!

It was clear from the outset that Raine & Horne were going to be the big winners (We were paying so we didn’t buy them any bullets!) so when the Tap Dr Team needed an extra player Billie ‘Sniper’ Mackie was volunteered to cross the line……So happy with her move she quickly responded by shooting me in the Head during the first game!

Allegedly the Tap Dr Team were unhappy with my tactics of shooting them in the back in game 2 however war is hell! Trish ‘Tactics’ McClelland yelled ‘Suck it up Princesses’ as she wiped pink paint from her goggles and wondered why the hell did I wear a fluoro shirt today of all days?

Cam ‘Mad Dog’ McDonnell covered himself in glory whilst executing a SAS roll only to overshoot the mark and having to crawl back behind the barricade grazing his knee in the process.

6 Foot 9 inch Baden ‘Secret Weapon’ Cody perfected the art of camofluague and  disguised himself as a tree for most of the day….unfortunately forgetting that the concept was to actually shoot the opposition.

Eva ‘The Greek’ Nistazos and Byron ‘Old Man’ Wauchope conducted a stunning black op stealth run down the right flank only to discover that running into a nest of machine guns was a very fast way to finish the op.

Lenny ‘Fodder’ Holt is still somewhere out in the bush….last seen covering himself in mud and laughing madly whilst ripping his shirt and tying it around his head….let’s face it…..no great loss!

And…….Natasha ‘Bubbles’ Bland called at 11.30am after her alarm didn’t go off for the 8am start??? Big Night Bubbles??

Undoubtedly you have heard all the hoopla that surrounded Movember over the month of November? 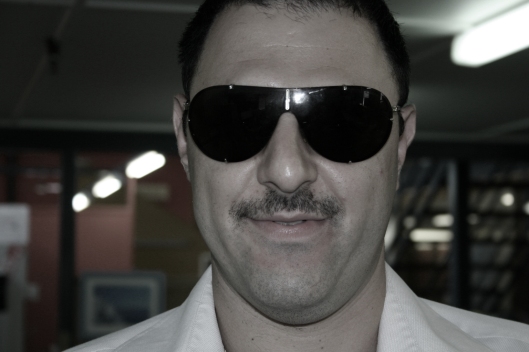 As you may be aware our Company, Raine & Horne Darwin, took the fund-raising activities we conducted pretty seriously and raised a healthy $10 400….which we reckon is pretty damn good.

Loads of companies and individuals participated across Darwin as there are lots of hairy guys…….and girls however I digress from the point!

and that point is specifically that we were the only capital city in Australia without a ‘Gala Party’ arranged for the participants by Movember. We felt a bit like the Forgotten Cousin!

So here is a link above to a video blog of some of the guys comments as we were setting up for our own Gala Party at Wisdom last week…..We raised another $1 000 for the charity on the night thanks to the efforts of our crew.

Let’s hope Movember gets it’s act together with a party for us next year and I am sure we could raise even more money by getting more people involved.

Our team at Raine & Horne Darwin take their Movember fundraising efforts very seriously. Every year we have raised the bar by setting higher targets throughout the month and this year we busted the total of $10 000 with 3 days to Mo!

We kicked the month off with ‘The Amazing Race’ Car Rally and then held their Trivia Night at the Pints club last week. The generosity of sponsors was incredible. In some cases we did not even have to ask if Companies would donate goods for our auctions or prizes they just walked in the door and volunteered. 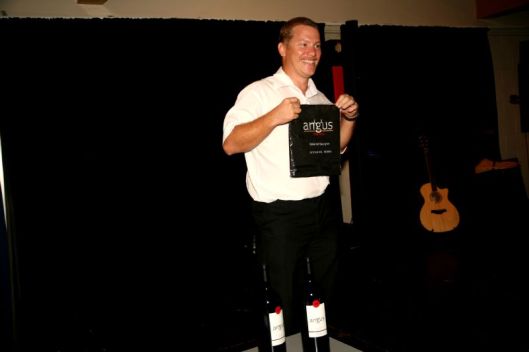 The secret to such a successful fund-raising event was in the organisation and my committee spent several hours planning and coordinating the events well before Movember rolled around. The beers that we consumed were a necessary part of the process as we would not have been able to be as productive without them?

The running of this sort of event needs to be fun as well. Growing a Mo is a bit of fun, then you get to have a laugh whilst you participate in the events. It just makes the whole process roll smoothly and then before you know it you have $10K in the kitty.

We have committed to making Movember our premiere annual Fund Raising Event for the last 3 years and plan to be involved for many more to come. The cause cuts close to the bone. Several of our staff have had close personal involvement with both Men’s depression and cancer. It’s a very relatable charity to be a part of.

The Mo Men and Mo Women are looking forward to the shave off on Wednesday at Wisdom Bar in the CBD when real estate life could return to normal.

Now as a final note I would like to comment that I was planning on bringing you some footage of the Movember events in this blog however my video editor, Peter Kafkas is attending the birth of his son as we speak so that will just have to wait for a bit however stay tuned! Let’s hope that the little bloke looks nothing like his Old Man below!

Well not quite! However there were a fair few with moustaches as Raine & Horne Darwin conducted their premiere fund-raising event for Movember.

Our Trivia night held at The Pints Club in Marrara was extremely well attended by almost 150 participants on the evening. Numerous sponsors made the event possible and came up with a minimum donation through cash and/or goods to the value of $200+ on every one of the 22 tables. 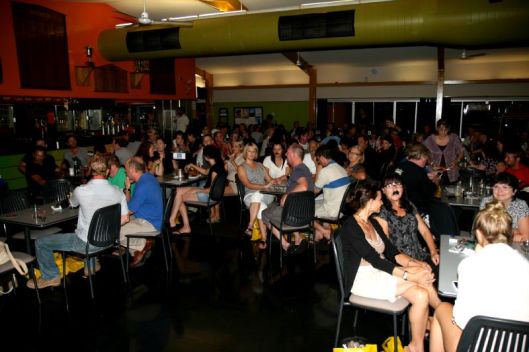 Everyone was entertained by our resident crooner, Mick Wallas, who donated his time to the evening. Mick played 15 snippets of songs for the ‘Rockwiz’ section and then continued to entertain the gathering with some choice tunes after the cranial challenge completed.

There was spirited bidding throughout the auction which raised over $3 000. The fund-raising target for the evening was $8 000 and at this point it looks like we will be over the $7 000 mark very shortly with a few straggler payments to come. Add this to the monies raised earlier in the month and we are very confident that we will pass $10 000 total this year. 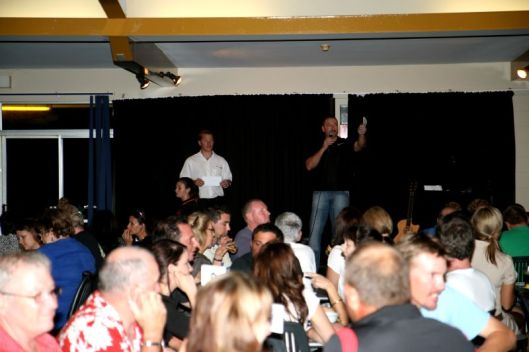 Thank you to our sponsors, all in attendance and my committee who have made these events possible. Stay tuned for the Movember Trivia Night video blog early next week.

My Team at Raine & Horne Darwin held the ‘Amazing Race’ Car Rally to raise funds for Movember yesterday. This is to be the first in a series of events that we conduct with our target to donate over $15 000.

Commencing at our Head Office building in Stuart Park a crowd started to gather from 9am in anticipation of the day ahead. 48 cars were entered with some really getting into the spirit and dressing up with Mo’s and eyebrows on their cars as well as donning team shirts. 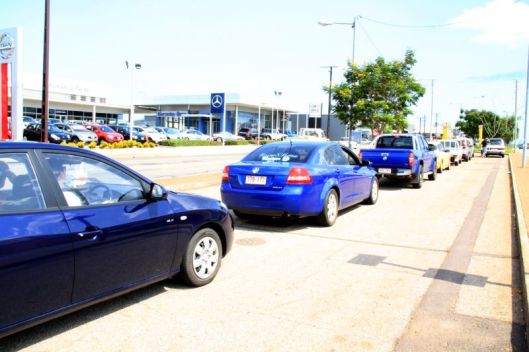 On the dot of 10am the first cars were released between the starter’s flags with instructions in hand to reach Checkpoint 1. It was no more than 10 minutes before I had the first participant on the phone needing directions because they were already lost and they hadn’t even reached the Fannie Bay Race Track? It was then that I realised we were in for a long day.

One of the teams entered from the Property Management section at R & H Darwin Office knew that they were in trouble when they took over 2 hours to complete the first stage which was scheduled to take 50 minutes. “30 minutes going back and forth wondering what the sewage plant smells like probably put us a little behind the eight ball?” said Carly Davis.

Obviously another car entered from the PM section had too much alcohol on board as Courtney today commented “Violet is not that bad a driver!”……Now we all know that cannot be the case?

One of my mates from Football who was in-car No 22 was seen wandering around the bush nowhere near the allotted course apparently looking for items off the ‘scavenger hunt’…….He continued this bush walk for 30+ minutes despite the fact that time was of the essence so it was no surprise when he appealed vigorously at the end of the day when he didn’t get last place!

Most participants were good-natured however there were looks of frustration passed my way when I stopped to assist a vehicle along the Stuart Hwy only to find out that the lady in the passenger seat was breast feeding…..Honest mistake!

The course covered over 200km with 4 checkpoints and an anticipated completion time of just less than 4 hours. There were in-car and on foot activities however some never made it on foot. All cars reached the designated finish point at Lake Alexander however that may have been because this was written on every set of clues rather than because they navigated successfully.

Combined Electrical were huge supporters of the day with 9 of their vans taking part in the rally. One of their teams ran second overall after they bribed the marshals  who were enjoying a quiet recuperative beer at the Deck Bar with a $200 donation in exchange for the answers to the entire last section. Marshal Lenny Holt was confident “There will be no investigation into this sort of bribery since the winners were Movember. There is no correlation between these activities and the Pakistan Match Fixing allegations?”.

More than $2 000 was collected for the day after entry fees, raffles, drink sales and fines were all tallied. The Movember trivia night is scheduled for Thursday the 24th November at the Pints Club. Contact Billie Mackie if you wish to participate or sponsor this event on billie@rhdarwin.com.au